Listening to the “news” this morning and they were talking about Sia and her movie that is facing a lot of backlash for it’s portrayal of an autistic girl.

I was going to link to a news article but they are all filled with so may ads and pop-ups it annoyed me. 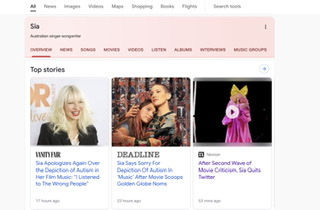 What piqued my interest was not the controversy but her reaction to it. She did all the right things, public apology, re-edit of the movie for future releases, I’m sure she’ll donate money to the right places, but she’s also deleted her Twitter account. I thought that was interesting.

She hadn’t said anything controversial on her Twitter, that I am aware of, so the reason for deletion is to stop the negative comments. At least that was my first thought. My next thought was that’s cowardly. But then my next thought (that’s right, multiple thoughts!) was that it is was smart and self-protective. If you know you’ll be emotionally destroyed by the negative comments why not stop them?

And my final thought was – is it okay? That’s the one that surprised me. A certain part of me seems to think she should be obligated to deal with the negative comments as some sort of punishment for her mistake. I don’t really think that when I actually stop and think. The world is filled with terrible ugly on the inside people who have found a release by trolling the internet trying to feel famous for their ugly comments. There is no reason for self flagellation by reading and even worse maybe responding to them.

So be well Sia, and I hope you will grow and learn from this experience.