Mondays chemo hit me HARD yesterday. I don’t know why sometimes it does that but I was down for the day. I feel exactly 435% better today.

So in the last year I have made a very concerted effort to adjust two things in my personality pattern. I have tried to drop gender from my speech, completely. I think it’s just good practice to stop placing so much emphasis on gender in our daily speech. This has been difficult. It would be easier for me if there were a widely accepted and used genderless set of words other than they, them. For me those words normally imply plural so it makes them awkward to come out naturally.

I have also tried to never comment on any strangers looks, for any reason. Not for good or bad. My opinion of someones looks makes no difference to their life or mine in any way, so it’s time to stop noticing. This has been easier in one way, I have done pretty good at stopping the speech but the mental talk is a little harder. I noticed this morning that I thought “oh they look different, they have put on quite a bit of weight” while watching something on television. Now, why would I think that instead of paying attention to the words that were being spoken?

You might think what’s the harm in thinking someone has gained weight? Well, the harm is that I want to adjust my thought patterns. I want to grow as a human being beyond our society’s obsession with how people looks and what they own or wear. I want to be better. I believe that I do not actually judge people on their looks. I do not think less of someone based on how good looking they are, but there are so many old habits that color our views that I just want to move beyond that. 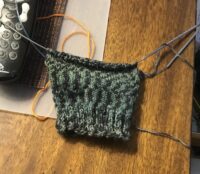 Not a Current picture, it is much bigger!

I am going to try a new method with the next pair so I won’t have the benefit of experience, but I am really enjoying this learning experience.

This is the color for the next set.